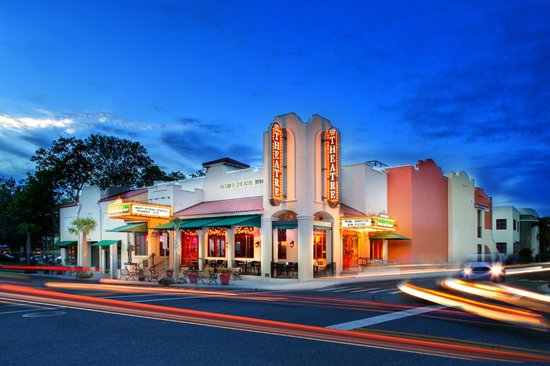 Florida Studio Theatre (FST) is Sarasota’s contemporary theatre, located in the heart of downtown. It has been in operation in Sarasota since 1973. The Florida Studio Theatre campus is a village of theatres – the historic Keating and Gompertz Theatres, the Parisian-style Goldstein and John C. Court Cabarets, and Bowne’s Lab Theatre. Near the Sarasota bayfront, FST brings an energy and vitality to the downtown area. Each theatre is small in size and large in impact – providing an intimate and engaging setting for high-quality, professional performances. Hip and historical, entertaining and challenging, we are the theatre where the street meets the elite, where everyone is welcome to come and engage in the art of theatre.

During its history, FST has grown into a theatre with a budget of over $6 million and over 30,000 subscribers a year, the third largest subscription theatre in the nation.

FST has modeled itself on the strength of creating the best in contemporary theatre at an affordable price. Overall, FST serves over 200,000 attendees per year through its major programs: the Mainstage Series, the Cabaret Series, Stage III, Children’s Theatre, Education, and New Play Development.

MAINSTAGE   |   The Mainstage is FST’s flagship program, producing the best in contemporary American theatre by presenting plays that speak to a living, evolving and dynamically changing world. The Mainstage Series features seven annual productions that draw from new works, regionally produced works and the latest Off-Broadway and Broadway plays. The creation and fostering of new works is a cornerstone of FST’s livelihood, having produced 33 world premieres and 89 regional premieres in the Mainstage series.

CABARET   |   The Cabaret series had its inaugural season in 1996 and now houses entertaining musical and improvisation performances. Popular music of all forms has come to life over the past 20 years on the intimate stage. This program celebrates the lyric poets of our time, as well as presenting social and political satire. The Cabaret is also integral to the creation of new work, and has produced 40 world premieres.

STAGE III   |   This offbeat program brings work to the Sarasota stage from both ends of the spectrum. Stage III is dedicated to the presentation of socially significant productions, stimulating audiences by presenting challenging content and unique form, featuring productions like Edward Albee’s The Goat. Though, it also offers something for the broader palate, seeking to entertain audiences with shows such as Shear Madness. Stage III is also home to the FST Improv Troupe. Since 2001, FST Improv has been entertaining audiences, growing wildly popular. FST also hosts the annual Sarasota Improv Festival, now in its ninth year, to bring troupes from all over the world to Sarasota audiences.

CHILDREN’S THEATRE   |   FST offers two theatre programs for our younger audiences. The WRITE A PLAY program is celebrating its 26th year. Since its inception, the WRITE A PLAY program has impacted over one million children throughout Florida and beyond, inspiring students to open their minds, explore their imaginations, and then, write it down. During the course of a school year, professional artists encourage students in grades Kindergarten through 12th grade to write their own original plays through the WRITE A PLAY arts in education initiative and submit to FST’s annual Young Playwrights Festival. The Saturday Children’s Theatre series began in 2016. Designed for children and families to explore the world of theatre arts, audiences have the opportunity to ask questions about the show – how did it make them feel, what did they see? – all while spending quality time with family, for less than the cost of attending a movie.

EDUCATION   |    FST’s education program offers children and adults a wealth of opportunities to discover their creativity, with offerings of over 20 classes weekly. Classes are offered each week to students aged five to 95 in theatre, dance and music. Florida Studio Theatre is happy to provide community outreach programs for financially disadvantaged, physically and mentally challenged youth, and nursing home residents. FST’s Children and Adult Scholarship Program provides about 15 percent of all participants with full or partial tuition waivers.

NEW PLAY DEVELOPMENT   |   New Play Development is the lifeblood of Florida Studio Theatre. FST’s philosophy of new play development is one that goes beyond the World Premiere. This is why, along with developing World Premieres such as Ethel Waters: His Eye is on the Sparrow, FST frequently provides plays with their second, third, or fourth productions. For example, in 2006, Around the World in 80 Days received an early production at FST before going on to an Off-Broadway run. FST receives 8,000 new plays a year from established, emerging, and young writers. Many new scripts developed through this program reach the Mainstage and Cabaret Theatre stages

The Mall at University To

The Resort at Longboat Ke